Page Updated - 05/01/13
The information on this page is taken from the Australian Church of Antioch website.

In the 1990's David began his seminary studies, which involved four Preaching & Healing Ministry Crusades in Victoria, New South Wales and Queensland, as Practical "hands-on" experience.  In 1989 David was ordained as a Pastor, in April 2000 David was issued his religious marriage licence by the Australian Attorney General's Marriage Celebrants Family Law Section. In 2003 David completed his studies and was issued with his Diploma and Bachelor of Theology.

David had been accepted into the Order of Saint Benedict which is a world wide community of Monks.  In a monastery with out walls.  David has from time to time worked and worshiped with both Traditional and Non-Traditional Congregations, so as to promote Inter-Denominational Relations.

Upon joining the OCAC David was appointed Vicar General for Queensland and Abbott for Australian of the Order of St Benedict.

On the 26th February 2011 David was Consecrated Bishop Ordinary for Queensland by ++Ian Adrian. 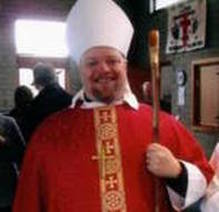 Presiding Bishop Ian Charles Adrian OCSR was born in 1966 and raised Anglican, in 2001 he was ordained Priest for the Anglican Church International Communion, there he served as Dean of St. Andrew's Cathedral and Archdeacon for Brisbane and surrounding region.

In 2008 he joined the Reformed Catholic Church and was consecrated Bishop on October 3rd 2008.